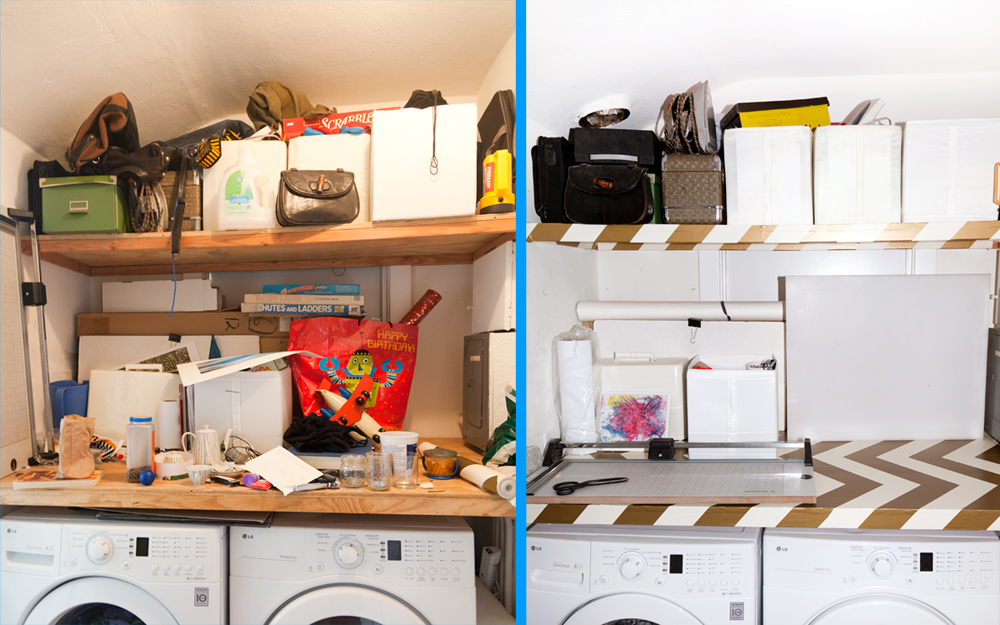 We've been really excited about the Tempaper line, a re-moveable, self-adhesive wallpaper that is perfect for renters or  those who are just scared of commitment.   I thought, "wow, I wish this had been around when I was a renter," but since I own my house now no one can stop me from putting up wallpaper, (except, of course, my highly textured plaster walls.) So, as great as it is, I thought I didn't really have a use for it.

And then I remembered. I've had a roll of Graham and Brown Wallpaper  in my laundry room (which also doubles as a storage and work space next to my office). I've been meaning to use that roll to wallpaper these ugly plywood shelves we put in nearly 2 years ago.  I've never gotten around to actually wallpapering them, though, because it seemed hard and not really worth the effort as I am about to start work on converting my garage into my office and will eventually demo the whole room and extend my kitchen. But, Tempaper seemed the like the perfect solution. Because, man, were those shelves ugly: 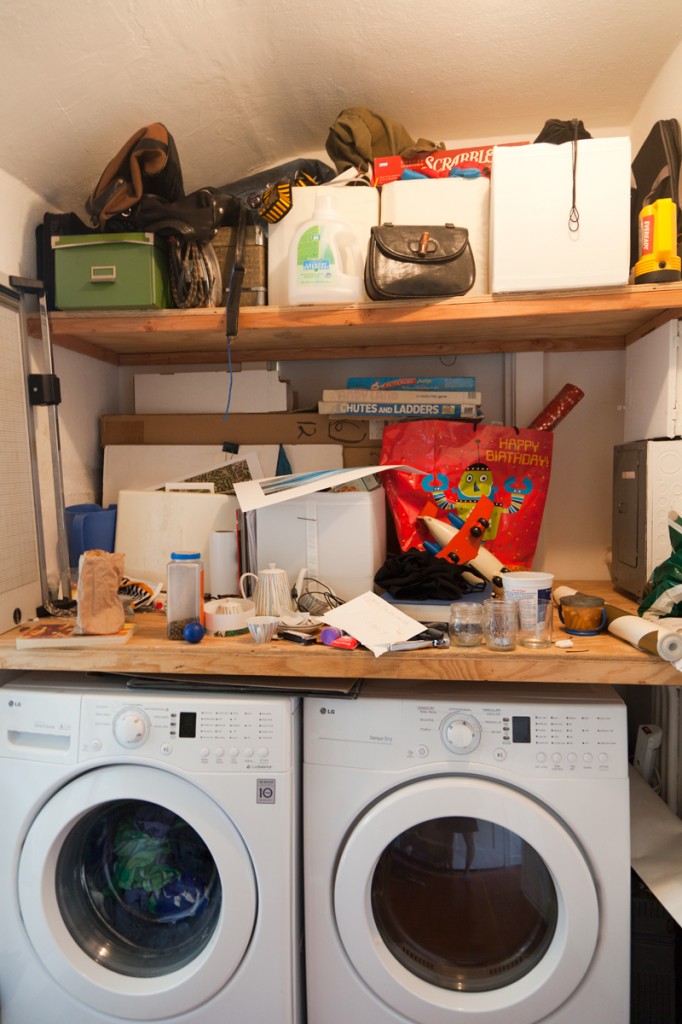 also, it was a huge mess.

So I thought I'd try to cover the shelves with Tempaper and hoped I could do it all in about 1.5 hours. It wasn't that easy.

Not really the Tempaper's fault, though.  I might have a slight tendency, on occasion,  to dive into things headfirst without doing the proper amount of prep and planing. This may have been one of those times. But eventually, I did get it done and I'm rather pleased with the results: 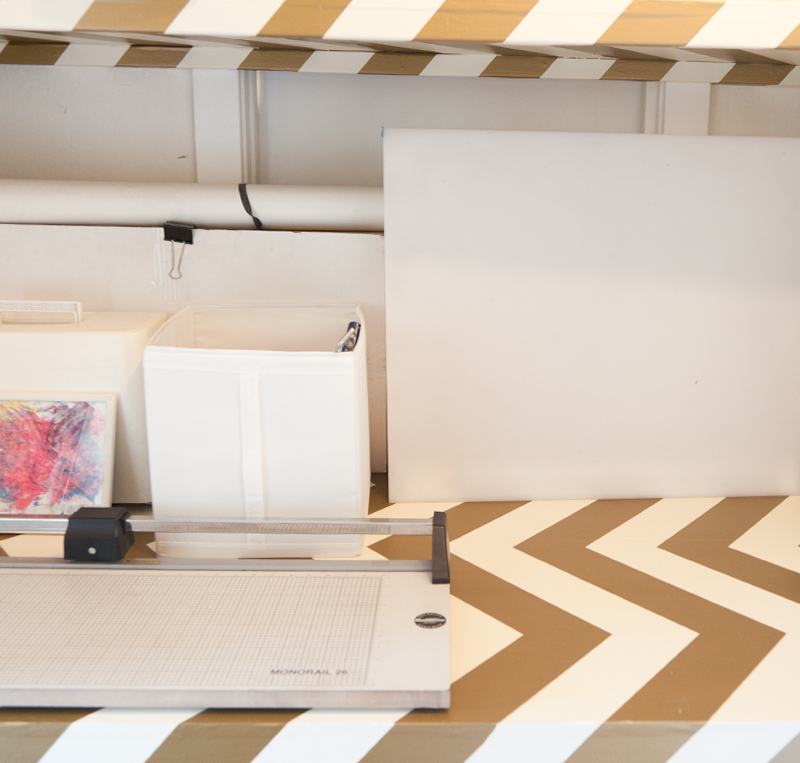 And if you are interested in using Tempaper for something other than walls - maybe you can learn from my mistakes.

*some sort of burnishing tool (something with hard smooth surface for flattening out air bubbles/ wrinkles ) I didn't prepare so I used the laundry detergent containter, but you can do better than that!

Putting down the first pieces was EASY. I thought I had this nailed - so fast, so quick: 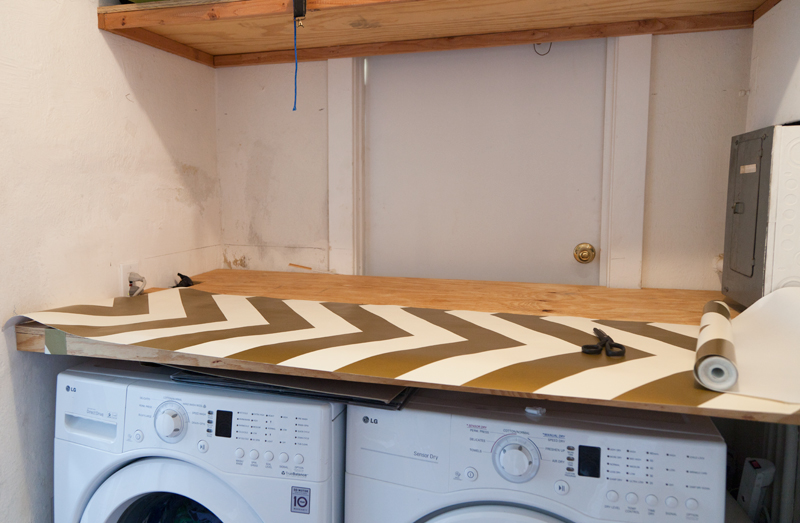 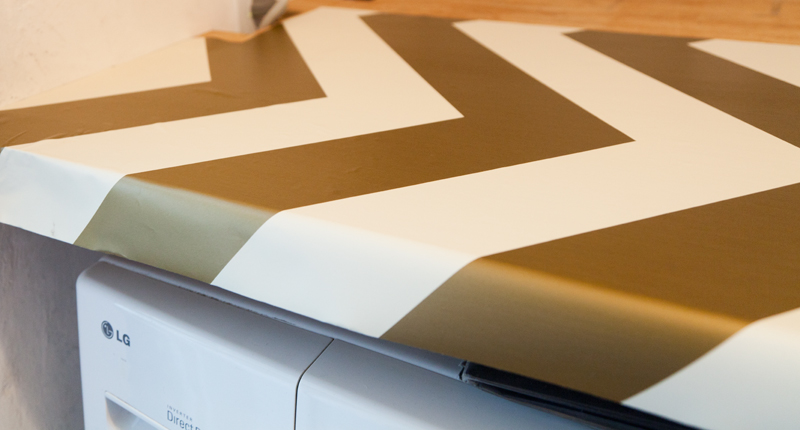 then I had to do the match - that was more difficult but not too bad. The nice thing about Tempaper vs. something like contact paper for this is that it is easy to pull it up and put it back down in case you make a mistake. Even when it sticks to itself you can pull it apart and smooth it out without too much trouble. Tempaper was made for people like me. 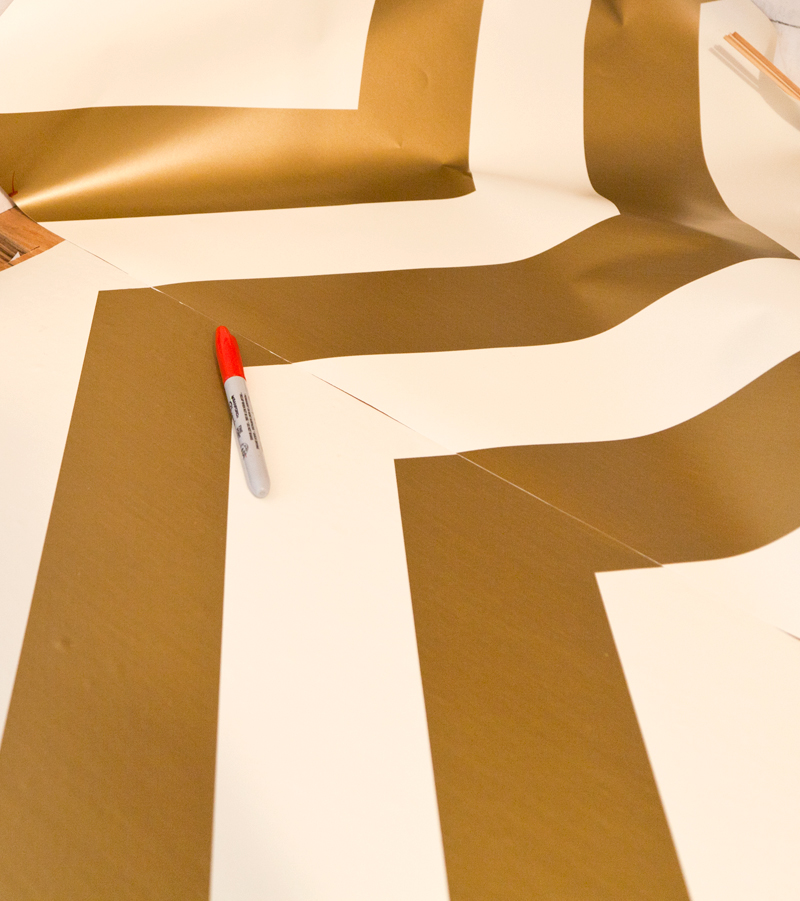 So far so good! But then, the challenging part came putting it overhead. Let's just say that took the most time - and having a helper and measuring precisely would have been a BIG help: 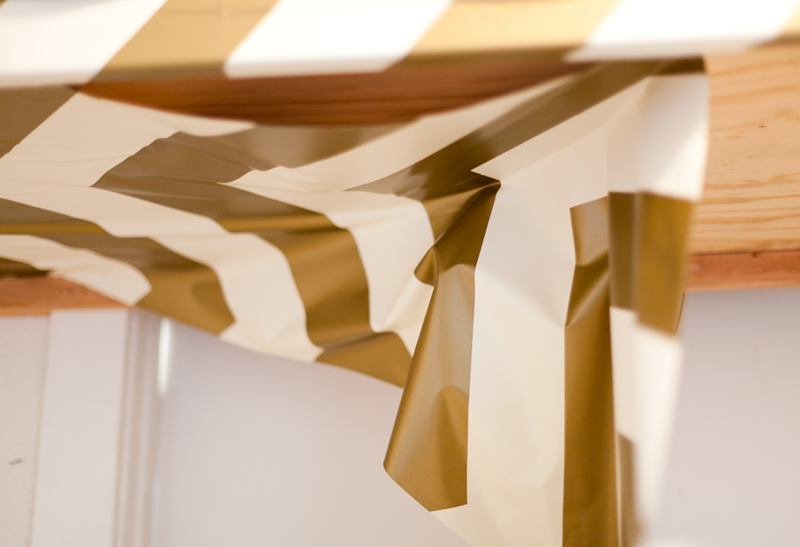 When applying the Tempaper overhead if you can have another set of hands to hold it straight that would be a huge help. The other thing I learned is that it stretches. Which can be really helpful but if you are trying to pull it taut get a clean application on a flat surface, but pull too hard on one side while using your head to hold the middle up and your foot to hold one corner and trying to affix the other corner with your hands (I'm very flexible)  - well, you just might pull it too tight.  I had a bit of frustration at this point. So I did what any master DIYer does. I took a break and went to get a coffee.

Eventually I came back, too my time and stared at one end and used the laundry detergent bottle as burnishing tool to help smooth everything out and i went slowing and carefully along the length of the shelf.  It ended up looking pretty good: 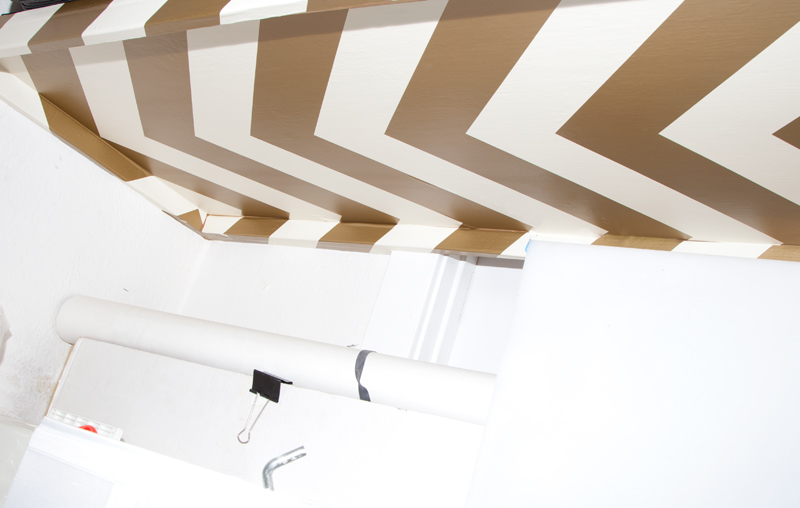 Because it streches and is so durable I did the rails in one piece by wrapping it all the way around - it was MUCH easier than I thought it would be and looks nicely finished with the match.

I'd say I spent about 5 hours total on this project - and 1 of those was on cleaning up beforehand, and 1.5 was just on doing the overhead part. Cutting and trimming was super easy and would have been even easier if I has had an exacto knife with a proper blade. 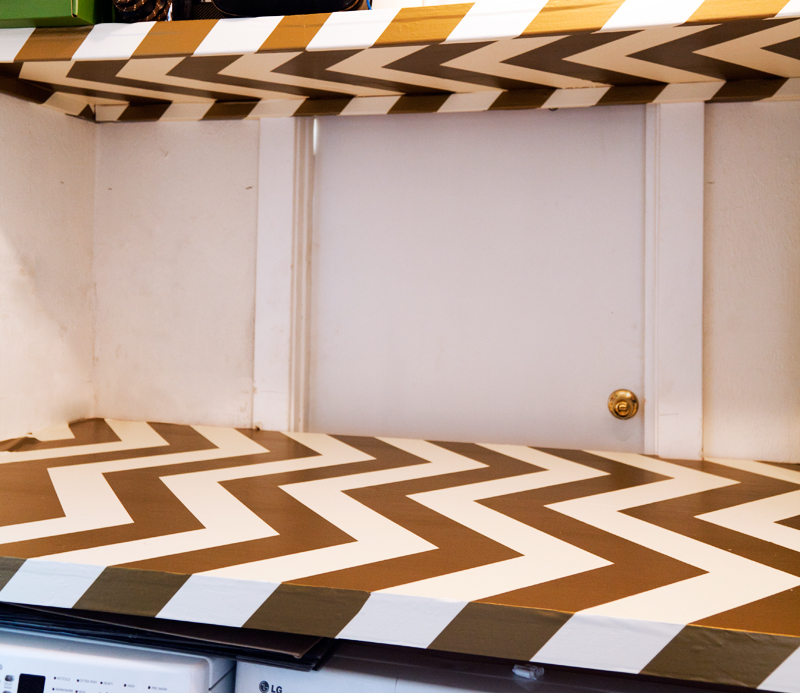 I am I'm so glad I did it, I think if i wanted to re do it - like in another pattern -  what I would do differently would be:

*Measure and cut everything EXACTLY - not just eyeball and trim later - which is how I did this time.

*Get a helper - at least for the overhead part - if I had had a helper for the whole thing I could have easily done it in less than 2 hours.

I pretty happy with the result. It is so much cleaner and nicer than the raw plywood and a great place to store sewing and photo projects. Before I did this I didn't want to but anything up there that I wanted to keep nice, but now I can and I can even wiped own the Tempaper! it is really a great product.

I used the Zee Paper in Gold.

Brighten up every room for Fall.

Start off Fall with a new foundation.